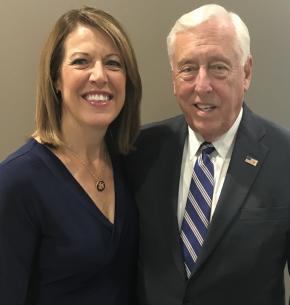 Washington, DC - This week, House Majority Leader Steny H. Hoyer (MD-05) will be in Illinois and Iowa in support of House Democratic challengers and incumbents running in 2020.

On Wednesday morning, Hoyer will travel to Illinois, where he will join freshman Rep. Sean Casten (IL-06) for two campaign events. Casten, a former green-energy entrepreneur and the founder of an energy efficiency non-profit advocacy organization in Illinois, defeated longtime Republican incumbent Peter Roskam in 2018, and is running for re-election next year.  On Wednesday evening, Hoyer will attend a campaign event in support of Rep. Lauren Underwood (IL-14).  The youngest African-American woman ever to serve in Congress, Underwood defeated a four-term Republican incumbent in 2018, running on her experience as a nurse and as a health care policy adviser in the Obama Administration.  Underwood is running for re-election in 2020.

Thursday will see Hoyer travel to Iowa, where he will join IA-02 candidate Rita Hart for two events in Iowa City.  Hart, a farmer, retired teacher, and former Iowa State Senator, ran for lieutenant governor in 2018 and has a long record of public service.  She is running to succeed Democratic Rep. Dave Loebsack, who is retiring.  Later that day, Hoyer will participate in a campaign event supporting freshman Rep. Abby Finkenauer (IA-01), who is running for re-election next year.  Previously an Iowa State Representative, Finkenauer defeated incumbent Republican Rep. Rod Blum in 2018 to become the second-youngest woman ever elected to Congress.

Hoyer will attend a campaign event on Friday with freshman Rep. Cindy Axne (IA-03).  Axne, a fifth-generation Iowan who worked for the Iowa state government and served as an advocate for early-childhood education, won election in 2018 in a Republican-held "Red-to-Blue" district.  She is running for re-election in 2020.

Hoyer has visited 24 districts in 16 states, raising or contributing $3.2 million since the start of the 2020 election cycle, helping to expand Democrats' House Majority next year.