Hoyer to Visit Dallas in Support of Democrats 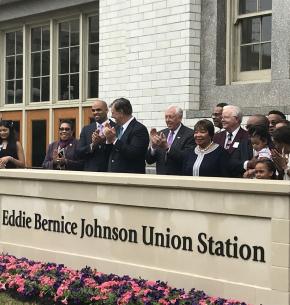 On Saturday morning, Hoyer will join Allred for an event in support of his re-election to Congress in 2020.  Allred, who was chosen by House Democratic freshman as co-president of their class, has already made a name for himself in Congress as a fierce defender of access to quality, affordable health care.  His resolution to protect those with pre-existing conditions and others benefiting from the Affordable Care Act passed the House this week.  A former professional football player who later became a civil rights attorney and worked in the Obama Administration, Allred unseated an eleven-term incumbent last November in a race that garnered national attention.

Hoyer will attend a dedication ceremony on Saturday afternoon to unveil the new name of Dallas's main train terminal: the Eddie Bernice Johnson Union Station.  Johnson, who was first elected to Congress in 1992, was the first African-American woman elected to political office in Dallas's history, and after serving three terms in the Texas State Senate, she became the first African-American woman ever elected to Congress from Texas.  Prior to her service in elected office, Johnson worked as a nurse with the Dallas Veterans Administration Hospital.

Last election cycle, Hoyer visited 135 districts in thirty-two states in support of ninety-four challengers and forty-one incumbents. In doing so, he raised or contributed $10.5 million toward Democrats' resounding victory in recapturing the House Majority in 2018.