Hoyer to Visit North Carolina and Virginia in Support of Democrats 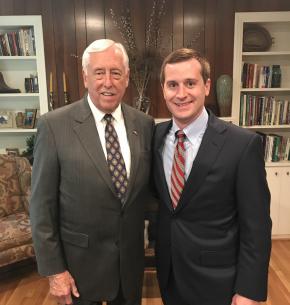 Washington, DC - House Majority Leader Steny H. Hoyer (MD-05) will be in North Carolina and Virginia this week to campaign on behalf of Democrats running for the House.

On Wednesday, Hoyer will travel to Charlotte, North Carolina, to attend two events in support of candidate Dan McCready (NC-09).  McCready, who ran in 2018 and narrowly lost in an election thrown out due to election fraud on behalf of the Republican candidate, is running again in a special election to be held on September 10.  A military veteran and businessman, McCready came within less than a thousand votes of winning the tainted 2018 general election.

Hoyer will travel to Virginia Beach, Virginia, on Thursday to campaign with freshman Rep. Elaine Luria (VA-02).  Elected in 2018 in a DCCC-designated Red-to-Blue district, Luria is a twenty-year veteran of the U.S. Navy and the first woman to spend her entire naval career on combat ships, deployed to the Middle East and the Atlantic.  She now serves on the Armed Services and Veterans Affairs Committees.

Already this election cycle, Hoyer has traveled to fourteen districts in eleven states, raising or contributing $1.4 million to help House Democrats maintain and increase their Majority in 2020.